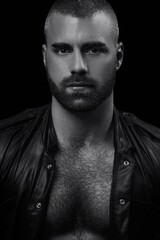 Nasty Pig is an American men's fashion brand, based in New York City. The gay-owned company was founded in 1994 by Frederick Kearney and David Lauterstein, who serve as creative director and chief executive officer, respectively. Nasty Pig initially focused on sportswear catering to the leather subcultures and has expanded into a full clothing line including underwear, jockstraps, jeans, shorts, T-shirts, and swimwear. Nasty Pig ranked on the Inc. 5000 in 2013 and moved into its current flagship store in Chelsea, Manhattan in 2014.